We often describe a problem as a collection of tasks operating on data. When many of the tasks can be executed concurrently, how can we efficiently exploit the concurrency?

In the compute-centric view of a problem, we focus on defining a set of tasks that operates on data. The underlying assumption is that the problem is compute-intensive and the distribution of data working set is of secondary concern for performance. This assumption is often valid for systems with a shared memory space, where concurrently executing tasks have small working sets and infrequent access to shared global data structures. In the case where distribution of data is crucial for execution efficiency, we should use the Data Parallel Algorithm Strategy Pattern, where the problem is expressed in terms of a single stream of tasks applied to each independent element of a data structure, and the solution involves efficient execution of tasks with data distribution as a primary concern.

The set of tasks for a problem can be derived from the structure pattern or computation pattern that describes the problem. For example:

For many problems, there is more than one way to define a task. For example, in the Monte Carlo Methods Computation Pattern, where the problem is expressed in terms of statistical sampling of solution space with experiments using different parameter settings, and the solution involves the efficient construction and execution of experiments and efficient analysis of the results to arrive at a solution, a task can be the execution of a set of experiments, a single experiment, or concurrent steps within an experiments. One application is in Value-at-Risk analysis in Computational Finance.

Tasks can be independent, or they can share data and collaborate. For example, in the Dynamic Programming Computation Pattern, where the problem is expressed in terms of natural optimal substructures where by optimally solving a sequence of local problems, one can arrive at a globally optimal solution, and the solution involves efficient construction and execution of local problems and assembling them to arrive at the global optimal solution, a task can be independent sub-problem, sub-problems that share data with other sub-problems.

Tasks can be known at beginning of execution, or can be generated as the computation unfolds. For example, in Backtrack Branch and Bound Computation Pattern, where the problem is expressed in terms of searching a solution space to make a decision or find an optimal solution, and the solution involves dividing the search space into sub-spaces and efficiently bound and prune the search spaces, a task can be the evaluation of sub-spaces, which are generated dynamically during the branch and bounding process.

The solution can arrived at in three steps: 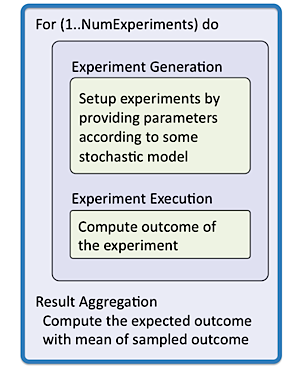 The problems in Monte Carlo Simulation Computation Pattern has a wide range of possible granularities. Using risk analysis in computational finance as an example: The problem aims estimate the risks in a financial contract given the volatility in future market conditions. It does the estimation by modeling the uncertainty in market conditions with a set of experiments with varying market parameters and measuring the liabilities and profits the financial contract would generate. In a typical Monte Carlo Simulation, tens of thousands to millions of experiments are conducted.

As shown in figure, there is an outer loop for conducting all experiments. A task could be defined as one experiment or an arbitrary subset of experiments, allowing efficient mapping to a wide variety of implementation platforms.

On the other hand, some problems in Graph Algorithms Computation Pattern often have a small range of possible granularities. In graph traversal for speech recognition for example, the goal is to find the most-likely sequence of word uttered by a speaker. The figure shows the architecture of a speech recognition system. The recognition process uses a recognition network, which is a language database that is compiled offline from a variety of knowledge sources using powerful statistical learning techniques. The speech feature extractor collects discriminant feature vectors from input audio waveforms, and then the inference engine computes the most likely word sequence based on the extracted speech features and the recognition network. 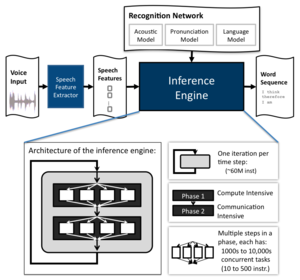 A parallel inference engine traverses a graph-based knowledge network consisting of millions of states and arcs. As shown in the figure, it uses the Viterbi search algorithm to iterate through a sequence of input audio feature one time step at a time. The Viterbi search algorithm keeps track of each alternative interpretation of the input utterance as a sequence of states ending in an active state at the current time step. It evaluates out-going arcs based on the current-time-step observation to arrive at the set of active states for the next time step. The traversal is heavily pruned, keeping track of on average 0.1-1.0% of the total state space. Each time step consists of two phases: Phase 1 – observation probability computation and Phase 2 – arc transition computation. Phase 1 is compute intensive while Phase 2 is communication intensive.

There exist significant application concurrency in each steps within the phases of execution of the inference engine, we can evaluate thousands of alternative interpretations of a speech utterance concurrently. However, the algorithm requires frequent synchronizations between steps in these phases of execution, limiting the scope of the task level parallelism. Specifically, with tens to hundreds of instructions per task, and a few thousands of tasks per step, these fine-grained concurrency can only be exploited with software or hardware level task queue based implementation platforms.

For efficient exploitation of the problem concurrency, we must consider the following two factors in task parallelism algorithm strategy:

Figure 1 illustrates the common ranges of implementation platform capabilities, and provide a guideline to the task management overheads and data synchronization overheads one has to work with. As more compute capabilities are being concentrated on-chip, we see the emergence of SW Task Queue and HW Task Queue based implementation platforms being increasingly important to support fine-grained application concurrency. 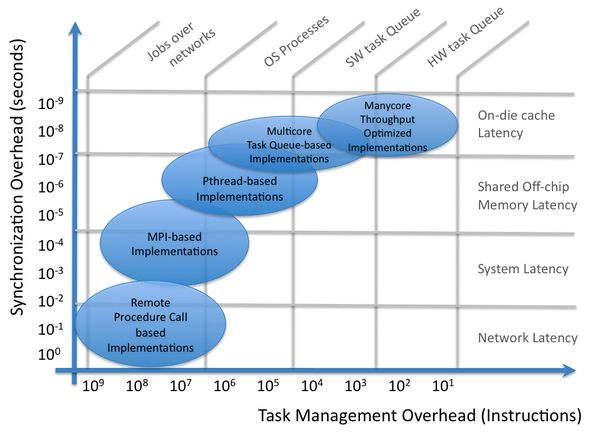 There exist patterns for flexibly determining the task granularity suitable for an implementation platform. In the Recursive Splitting Algorithm Strategy Pattern, the problem is expressed in terms of the composition of a series of tasks that are generated recursively, and the solution involves recursively splitting work into fine-enough granularities for effective load balancing.

There are also other alternatives to load balance a parallel implementation platform. In Task Queue Implementation Strategy Pattern, the problem is expressed in terms of a list of tasks that can be executed in parallel, and the solution involves having an efficient way to load balance the system without having the task queue becoming performance bottleneck.

Tasks must have finite execution times

Monte Carlo Simulations on a Cluster of Computers

We illustrate the task parallelism pattern using Monte Carlo Simulation on Multicore processors as an example to illustrate the definition of task granularity and the interactions between tasks.

One scenario where Monte Carlo Simulation is used is in risk management in a financial firm. The risks a financial firm assumes are in the form of financial contracts it enters given the volatility in future market conditions. The risk is usually measured by a metric called Value-at-Risk (VaR). For example, if a portfolio of stocks has a one-day 5% VaR of $1 million, there is a 5% probability that the portfolio will fall in value by more than $1 million over a one day period, assuming markets are normal and there is no trading. Informally said, one should expect a loss of $1 million or more on this portfolio ion 1 out of 20 days. However, as long as there is a large expected long term gain, the risk may be justified.

A large financial firm can have as many as 500,000 contracts in any given day, in the form of various forms of options and financial trading instruments. Each contract should have its risks evaluated based on its terms and conditions given new market information collected each day. Based on the risk profile of each contract, the firm may decide to buy or sell the contracts to adjust its portfolio‘s exposure to market volatility.

To evaluate the risk of a contract, one typically sample 1000 market scenarios, each over 30 to 100 time steps. This provides multiple levels of potential concurrency in the application to map to a parallel implementation platform. At the top level, all 500,000 contacts can be evaluated independently. For each contract, the 1000 market scenarios can be evaluated independently. For each scenario, the uniformly distributed (pseudo) random number generation can be generated independently; scenario generation requires some sequential processing, and scenario evaluation over the time steps happens sequentially.

The SIMD level is the most restrictive parallelism to take advantage of, where instructions must execute in lock step on a processor pipeline cycle-to-cycle basis. This has implications on what level of concurrency can be uniform enough to be mapped to this level. For the multiple threads sharing a core, the threads not only share the computation resources but also share the resources in the memory sub-system. This has implications on the amount of parallelism to expose, and care must be taken to take advantage of local data reuse, and not to expose too much parallelism to overwhelm the memory subsystem. Cores on the same chip share chip-level resources, and has also has the same resource constraints to consider. Across systems in a cluster, systems are loosely coupled, and communication between clusters machines is expensive.

Given the application concurrency and the platform parallelism, we can make the following mapping:

Map scenarios to SIMD lanes: different scenarios of the same instruments are usually simulated with the same routines, thus simulation in lock step is not a significant constraint. The task granularity can be controlled by mapping multiple scenario at a time to one task, such that the scenarios are simulated sequentially to increase the task granularity and reduce task management overhead.

Map contracts to cores: Contracts are independent and can be mapped to different cores. The aggregated risks can be summarized on a per core basis.

Map contracts to systems in a cluster: Contracts are independent and can be mapped to different cores. The final risk aggregation can occur with the cluster-wide reduction at the end of the risk analysis computation.