Finite state machine (FSM) allows for the concept of history, which is referred to as a state. A current state is determined by past states of the system and many problems are expressed in terms of finite state machine such as control applications, compilers, lexers, speech recognition or string matching. 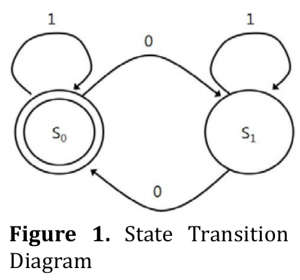 For complex problems, the difficulty in representing the system as FSM is how to deal with the state explosion problem. A system with nvariables that can have Z values can have Zn possible states.

StateChart[1] extends a FSM to have concurrent FSMs which is referred to as AND decomposition or parallel decomposition. As you can see in the figure 2, a system Y can be represented as orthogonal product of subsystem A and D. The transitions in each subsystem can occur simultaneously. This reduces number of states and edges in the FSM solving state explosion problem.

FSM is further distinguished by Deterministic Finite Automata (DFA) and Nondeterministic Finite Automata (NFA). In DFA, for each pair of state and input symbol there is only one transition to a next state whereas, in NFA, there may be several possible next states. Often NFA refers to NFA‐epsilon which allows a transition to a next state without consuming any input symbol. That is, the transition function of NFA is usually defined as T: Q x (ΣU{ε}) → P(Q) where P means power set.Theoretically, DFA and NFA are equivalent as there is an algorithm to transform NFA into DFA [2]. 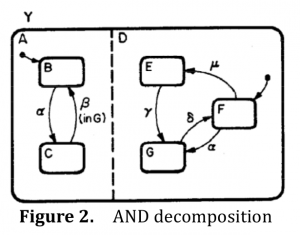 (1) NFA has multiple paths to maintain to recognize input string as there can be multiple transitions for a given input symbol in NFA. Each unit of execution (UE) can execute each path in NFA in parallel.
(2) Concurrent FSM has multiple sub‐FSMs and each UE can execute a sub‐FSM in parallel.
(3) Suppose that we have already seen the sequence of input symbols. We can divide the sequence into multiple sub‐sequences of input symbols and execute FSM in parallel with each sub‐sequence. However, we need to know the initial state of each sub‐ sequence. One can resolve this by speculation and re‐execute FSM only if the speculation fails.

Post­condition: For FSMs, if the input string is accepted, then it ends at states in F. For FSTs, a stream of valid output symbols has been emitted.

Consider we need a program in C that reads a text from standard input stream, line by line, and prints the first word of each line. We need first to read and skip the leading spaces, if any, then read characters of the first word and print them until the word ends, and then read and skip all the remaining characters until the end‐of‐line character is encountered. Upon the end of line character (regardless of the stage) we restart the algorithm from the beginning, and in case the end of file condition (regardless of the stage) we terminate the program.

it would be better to implement with state transition table as shown below. In the program below there’s an array named the_table, which defines the table. The rows of the table stand for three states, while columns reflect the input characters (first for spaces, second for the end of line character, and the last is for all the other characters). If the number of states is much larger, a graph where nodes present the states is preferred.

Consider we are lexing HTML documents. We need to identify each lexeme from input string in the documents based on the HTML tag specifications. Suppose the specifications are given as: 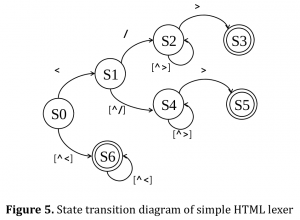 As well as other FSM problem, lexing is inherently sequential processing in that the current state is based on the previous state. However, we observe that HTML lexers converge to a stable, recurring state after a small number kof characters. In figure 5, most of characters stay at state S6. This allows us to speculate the execution of the HTML lexer. We spilt input into blocks with k‐character overlap and scan blocks in parallel, each starting from S6. If speculation fails (i.e. does not converge in k‐overlap), the block is rescanned.